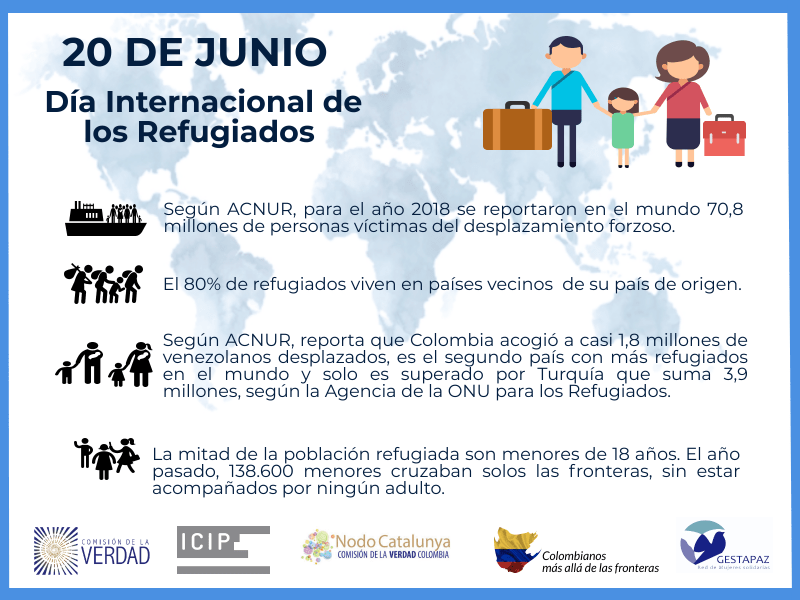 The project: “Myths and Realities about Transitional Justice in Colombia”, through the communication strategy called “Colombians beyond borders”, expresses solidarity with all the victims of the armed conflict who have had to leave their lands because of the war. On 20 June, we join this year’s World Refugee Day.

Brigadas Internacionales de Paz de Catalunya coordinates, in collaboration with the Truth Commission of Colombia, the Nodo Catalunya of support to the Commission and the technical accompaniment of Gestapaz, a strategy of education and awareness-raising on the Truth Commission and transitional justice in Colombia, based on a project funded by the Instituto Catalán Internacional de Paz – ICIP (International Catalan Institute for Peace – ICIP).

This podcast (in Spanish) is presented on 20 June, World Refugee Day, decreed by the United Nations General Assembly. It connects us with refuge and exile through the life stories of Colombian men and women who give us, in the first person, the richness of their testimony.

In the podcast we meet the Colombian journalists Natalie Guerrero and Juan David Escorcia, and Alejandra Rojas, a lawyer with experience in working with victims of the armed conflict with the UAV in the Valle del Cauca branch.

This is the first of four audio pieces as a preview of the media campaign of the project: “Myths and realities of Transitional Justice in Colombia”. The products proposed for the educational and awareness-raising campaign are open to be shared among many people: to be heard, read and to participate in the initiatives.